Xtend2 - What's In The Pipeline?

In the last weeks, the Xtext team has been busy with creating Xtend2. Xtend2 is the successor for Xtend and Xpand and implemented on top of Xbase1. I think we made really great progress both within Xbase - which is a reusable expression language that can be embedded into any language that is developed with Xtext - and with Xtend2 itself. 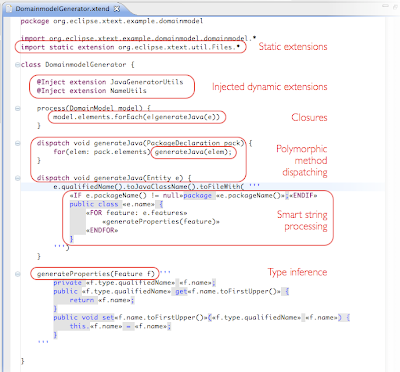 Xtend2 provides some unique language features and great Eclipse based tooling. It's really a pleasure to see how the well choosen orthogonal concepts interact with each other and how their total creates a language that feels as fantastic as Sven predicted.

If you are at EclipseCon and as eager to get your hands dirty with Xtend2 as I am, make sure to attend the tutorial that Jan, Sven and I will give there.
[1] The Xbase development is sponsored by itemis and the Federal Ministry of Education and Research.
2 comments:
Email ThisBlogThis!Share to TwitterShare to FacebookShare to Pinterest
Labels: Eclipse, Xtext
Newer Posts Older Posts Home
Subscribe to: Posts (Atom)